Op-Ed Le Monde "Against Covid-19, we must ensure access to vaccines in Africa"

Please find the full Op-Ed « Against Covid-19, we must ensure access to vaccines in Africa" published in Le Monde on January 18th from this link for subscribers to Le Monde from this link for people who are not subscribed. This Op-Ed was signed by Stéphane Besançon, general director of Santé Diabète and Cynthia Fleury, member of the board of directors of Santé Diabète. Find below the list of signatories. 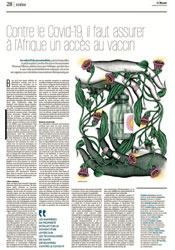 Although it would be inaccurate to generalize given the diversity of contexts, a large part of African states have been rather spared from previous waves of COVID-19. The reasons for explaining it ? The relative good preparedness of certain countries to pandemics, as well as great responsiveness in the measures taken. However, since December, the epidemic seems to be accelerating in several West African countries. These countries count among the most fragile and poorest health systems in the world. Thus, despite a first wave that was generally rather well contained, many African states are now facing a potential major crisis: containing this new wave, with fragile and under-resourced hospital infrastructures and intensive care services in human resources, beds and equipment. At the end of December, testimonies collected at the hospital of Mali in Bamako showed, for example, that the intensive care services were in a catastrophic situation, and this while « the top of the curve » in Mali has not yet been reached. Therefore, if these countries were to face a major wave, the consequences could be dramatic, as intensive care services are immediately saturated with just a few patients.

The situation facing many West African countries at the start of the year and the column published in Le Monde, were also addressed by Caroline Pare, during the program Priorité Santé on January 18 on Radio France Internationale. To listen from this link

Take action
Do I have diabetes ?